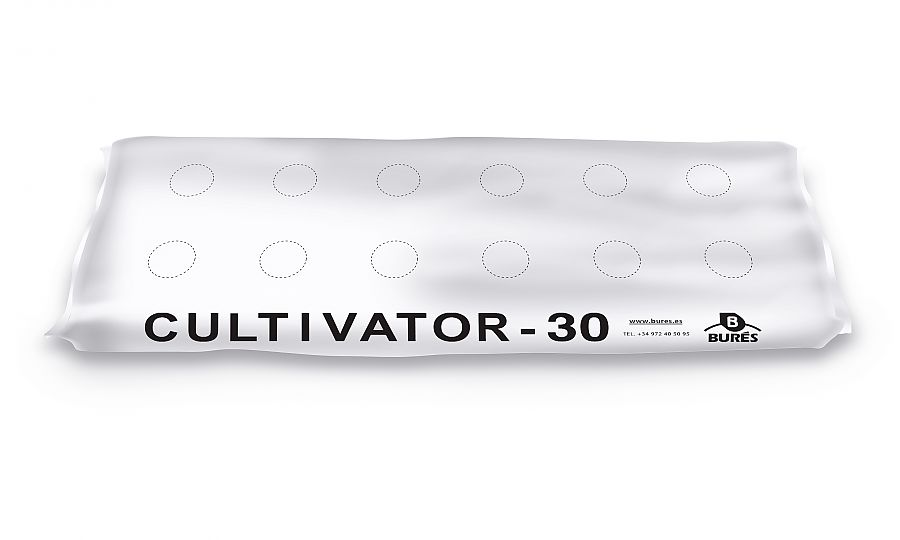 CULTIVATOR 30 PLUS is a professional grow bag consisting of a mixing substrate, specially designed for soilless cultivation of a wide variety of plant species.

CULTIVATOR is a professional cultivation system in which a mixing substrate is used, specially designed for soilless cultivation of a wide variety of plant species. The bag acts as a covered container, avoiding contact of the substrate with the soil and air particles. It is used as a substitute for poor or depleted soils and to avoid the appearance of diseases derived from cultivation in the soil. In this sense, it prevents impurities from the air, spores or other suspended elements from falling onto the substrate and germinating during cultivation, and from harmful microorganisms proliferating. The substrate acts both as a support for the plant and as a nutrient store.

Characteristics
The substrate is usable both in short growing cycles and in long growing cycles.
Thanks to the properties of CULTIVATOR 30 PLUS and its formulation, a uniform growth of the entire production is obtained.
The bag format allows cultivation on contaminated soils, or in paved greenhouses or with anti-grass mesh.
In greenhouse crops, the grow bag can be used for up to three seasons.
Two-layer container (white-black) with inhibitor treatments to ensure its stability on exposure alone.
With a NPK 15-7-15S + 3MgO bottom fertilizer with slow release nitrogen, for vigorous growth of the crop.
Application
CULTIVATOR 30 PLUS planting substrate presents excellent results in cut flower (Amelia, Carnation, Lilium, Chrysanthemum, ...) and horticultural (cucumber, zucchini, melon, strawberry, tomato, ...) productions.
Up to 12 plants can be planted in the bag.
Presentation
It comes in 30 x 95 cm (27.5 liter) grow bags. If the client wishes, the holes can be marked to facilitate the transplant of the campus to the bag.

F TECNICA CULTIVATOR (r6) DATA SHEET CULTIVATOR (r6) - english FICHE TECHNIQUE CULTIVATOR (r6) - francés FT CULTIVATOR 技術データシート - japanese
Request product information
This website uses first- and third-party cookies in order to improve the performance of the page and for analytical and advertising purposes. If you want more information or would like to manage them, please go to the
Cookie Settings.
I ACCEPT COOKIES
WE CARE ABOUT YOUR PRIVACY
You can set your consent preferences and determine how you want your data to be used according to the purposes detailed below.
Uncheck all ACCEPT ALL
These cookies are necessary for the basic operation of the website and, therefore, are always active. They include cookies that remember the actions you make when browsing the website in a single session or, if requested, from session to session. They help in online shopping processes, in addition to providing assistance in security matters and in compliance with regulations.

Analytical cookies allow us to improve the web browsing experience and to provide the administrator with statistical information such as the number of visitors or how users use our platform.

Remember that you can always change your preferences by going to our Cookies Policy
SAVE PREFERENCES
×ATENCIÓ: Cookies no configurades en l'idioma actual. Revisa la teva configuració al plugin, gràcies!